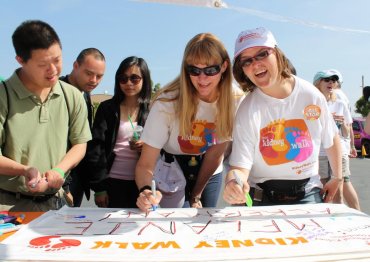 In 2010, a routine physical exam revealed that Melanie A’s kidney were failing, she had no symptoms.

The 19-year-old, developmentally delayed Irvine resident was diagnosed with a kidney disease known as FSGS. She only had 27% kidney function and time was running out.

“Over the course of the next two years, we watched her kidney function slowly deteriorate down to 12%,” said Carol, Melanie’s mother.

Hoping to find a donor before Melanie needed dialysis, Carol and several family members all stepped forward to donate. However, none were suitable matches.

As the search ground on, Carol started a Facebook page called “Kidney for Melanie” and asked friends and family to “like” and “share” it with everyone they knew.  The A’s also got involved with the National Kidney Foundation, speaking at events about their story and the need for organ donors.

Then, last year, Heather B., the niece in-law of Melanie’s Godfather, Mark J., stepped forward to be tested. She was a match. Heather, who is married and has three children, drove from Arizona to LA for the July 18, 2012 surgery. Heather’s kidney started working immediately after being placed in Melanie. The nurses in the hospital called it a “best-case scenario” for Melanie.

“My doctor’s goal was to go straight to transplant with no dialysis, so it felt great to be able to do that,” Melanie said. “I can eat all kinds of favorite foods now; before I was very limited and not happy about it.”

It’s been almost a year since Melanie received the kidney transplant that changed her life. The young woman is now thriving in an adult transition program, working in a department store and continuing to go to school.

The A’s are eager to share their story to help others who have to go through the organ donation process. The As, their friends and family members will be walking at this year’s Orange County Kidney Walk held on Sunday, June 2, at Aldrich Park at UC Irvine. Melanie will be cutting the ribbon to start off the event.

The Kidney Walk is a non-competitive stroll that raises funds to fight kidney disease through awareness, prevention and treatment programs. Walkers participate as individuals or form teams with family, friends or colleagues. Those interested in getting involved or supporting a walker can visit http://www.kidneywalk.org.

“We’re coming up on one year and we want to spread the message of organ donation,” said Carol.  “We know there is so much more to be done and we are blessed to be a part of it.”